Imagine that you are selling mobile phone accessories (cases, protective glasses, films, chargers). After spending several hundred dollars on contextual advertising, you received 500 clicks, but none of the users left a request, made an order, or even called. And all because 95% of inappropriate traffic came to the site for such requests that are irrelevant to your business, such as “mobile phone”, “how to choose a mobile phone”, “order a custom case drawing”.

Negative phrases and negative keywords are used to prevent ads from showing for words and phrases that do not correspond to your field of activity and the topic of the advertising campaign in Google Ads. Regular cleaning of negative keywords significantly increases the effectiveness of contextual advertising, so today we will tell you how to do it in just 5-7 minutes a day. Unlike dynamic adwords ads, this method is more reliable and accurate.

In Adwords campaigns, negative keyphrases can have three types of matches:

What does this mean and what is the difference between them? By default, Google Ads uses broad match for negative keywords - contextual ads are not shown for queries that consist of all parts of a negative phrase in any order. At the same time, it will be shown if the request consists only of a part of the negative phrases, for example: 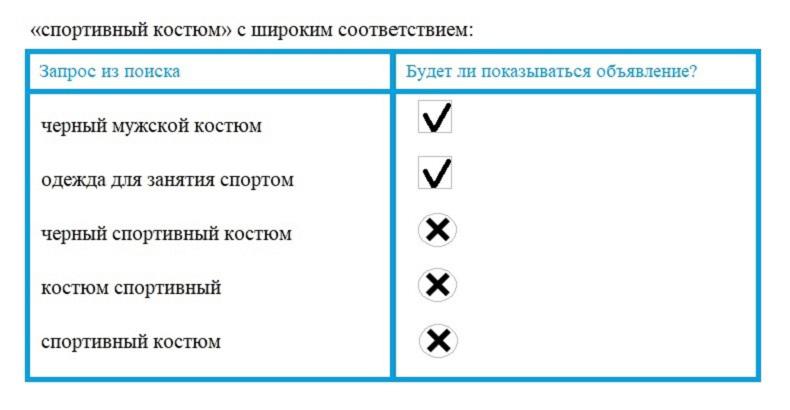 By setting a phrase match, ads for the selected negative keyphrase will not appear, even if it includes other words. 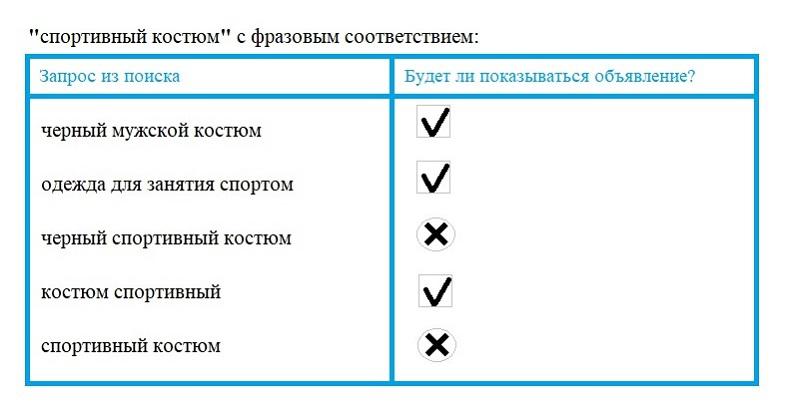 Pay attention to the marks - this is how the phrase match is indicated.

By choosing an exact match, your ads will not be served for queries that exactly match the negative keyphrase. If the user enters a phrase in the search engine containing other words along with the selected negative keyword, then contextual advertising will be shown, for example: 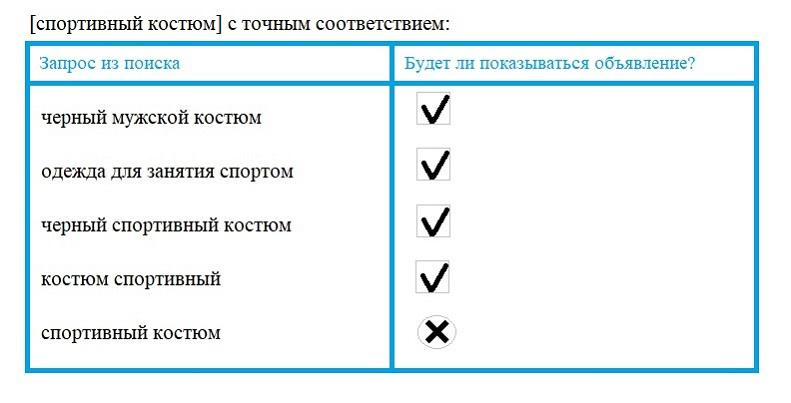 Pay attention to the square brackets - this is how the exact match is indicated.

You need to be careful when creating a list of negative keywords, otherwise, with a large number of them, very few Internet users will see your search advertisements in Google Ads.

Important: the maximum length of a negative keyphrase cannot exceed 10 words. If the negative keyword is the 11th word in the query, then the ad will still be displayed.

For example, we defined “cheap” as a negative keyword. If the user entered in the search engine "blue tracksuit for a boy of ten Reebok spring autumn cheap", then your ad will be shown:

But in the case of the query "blue tracksuit for a boy of ten Reebok cheap", the ad for this keyword will not be shown:

How to add negative keywords to campaigns or ad groups

It is worth noting that adding negative keywords to advertising campaigns within the context of the display network allows you to avoid showing ads on the pages of web portals that contain these very words.

And so, to add negative keywords, you need to:

Log in to your Google Ads account ►► select and press "Keywords" ►► switch to "Negative keywords" ►► click on the "+" icon ►► select the method, place of adding (group or campaign) and campaign or ad group. 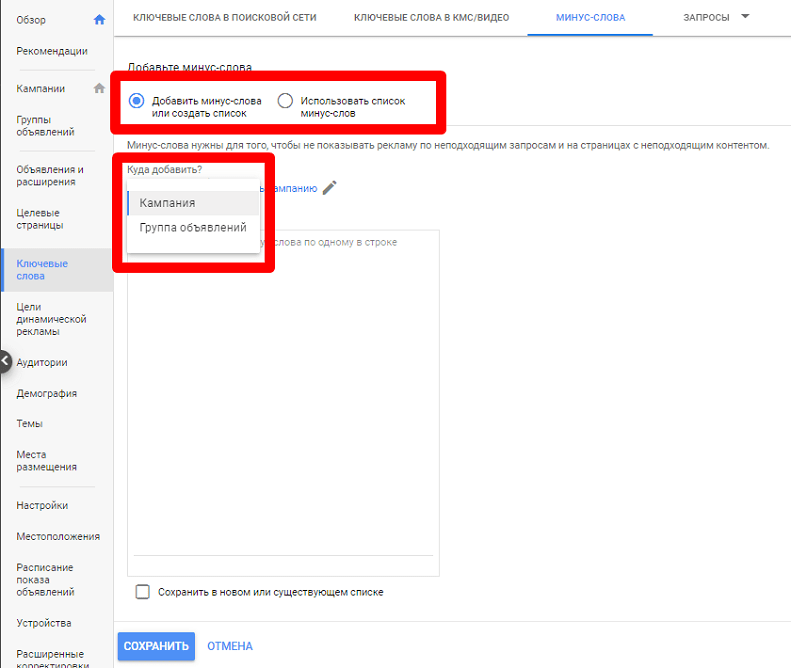 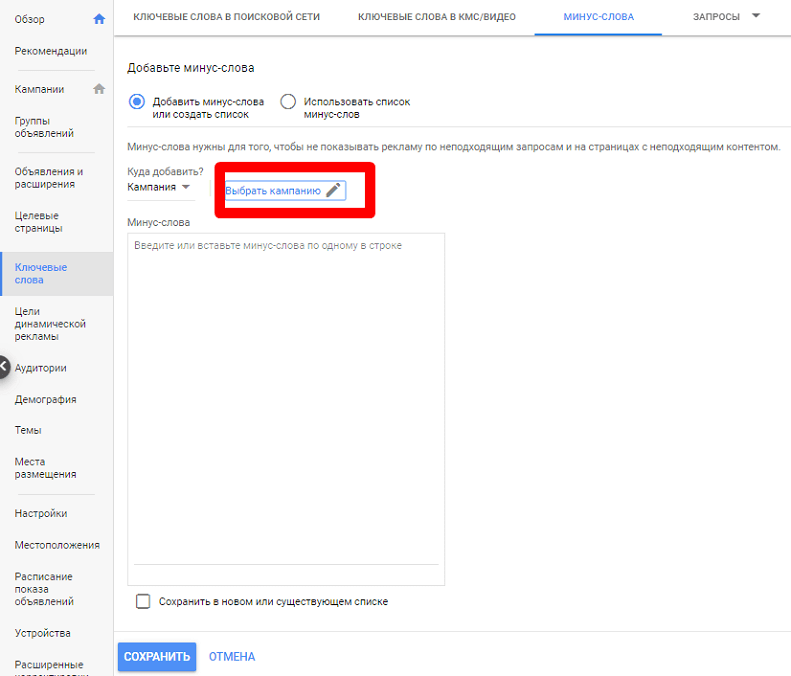 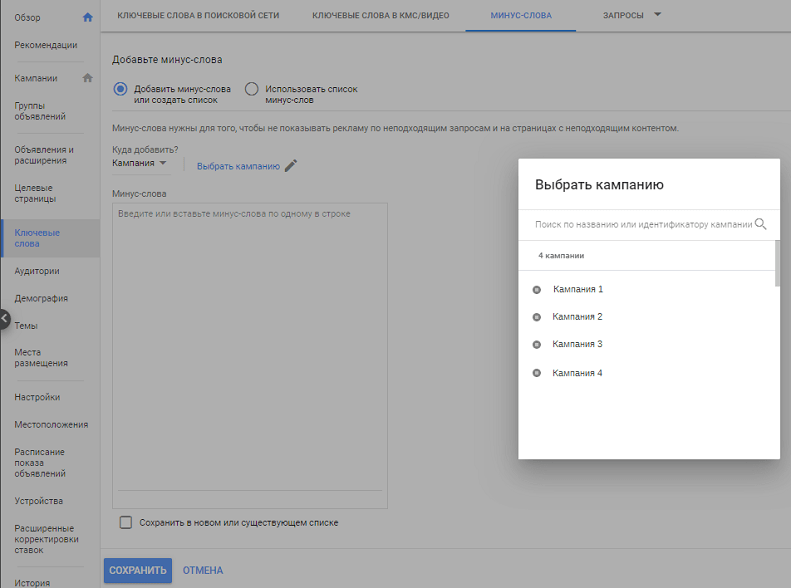 Further, in a special field, you need to enter negative keywords in a column, that is, no more than one phrase / word per line. You can save negative keywords to the current list or by creating a new one. And don't forget about matching!

Important:If the same phrase is used both as a negative keyword and as a keyword, then advertisements for it will not be shown.

You can add negative keywords at the group level in the same way. Only in the line "Where to add?" you must select "Ad group" and specify it. How to create negative keyword lists?

No user can know for which keywords you set up to display search ads. However, if they google a phrase that is similar in spelling or meaning to yours, it often leads to unearmarked impressions of the search ads. To prevent this from happening, the Google Ads functionality provides all the possibilities: define and create lists of those negative keywords that will be irrelevant search queries. Taking advantage of all the opportunities to optimize PPC advertising, you can even automatically add the same negative keywords to different campaigns.

In order to form a list of negative keywords, you need to think carefully about which requests your ads should not be shown for, that is, which ones are 100% inappropriate for your offers. To help newcomers, Google offers Search Query reports with various options.

Actually, this is what the Google Ads help says:

In one Google Adwords account, you can create up to 20 lists, which do not exceed 5,000 negative keywords / phrases.

This is how the list of negative keywords should look like (we immediately apply the match type to each phrase using parentheses or quotes):

Using this method, you can select one of the current lists of negative keywords or create a new one and apply it immediately. Your actions: 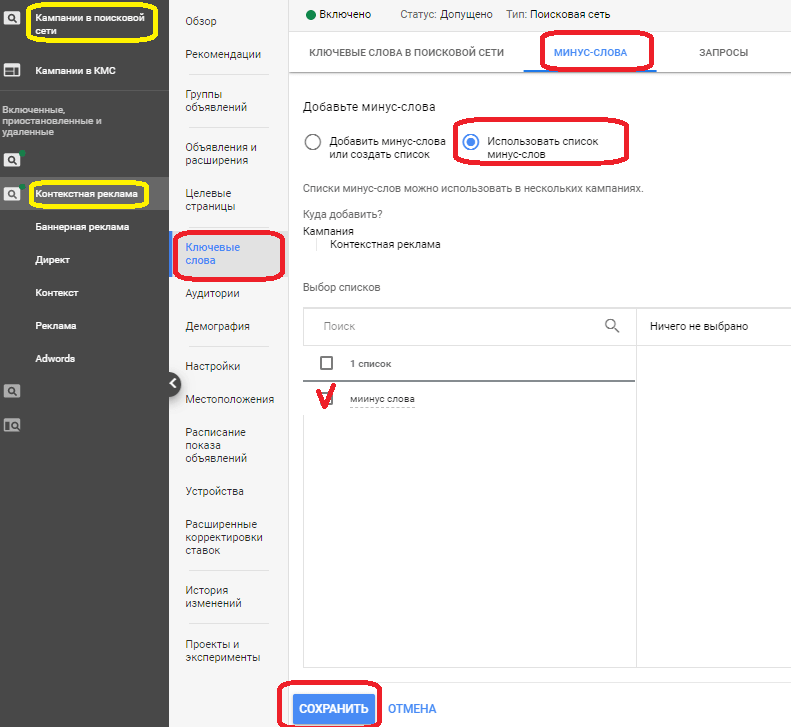 Adding and applying negative keyword lists to multiple campaigns at once

There are two different ways to apply negative keyword lists to 2 or more campaigns at once. Let's take a closer look at each of them.

Method number 1 (through the "Campaigns" page)

Using this method, you will not be able to create a new list and apply it right away. Adding negative keywords through the Campaigns page allows you to work only with existing negative keyword lists. This is the most popular way. Your procedure:

In the menu, select "Campaigns" ►► tick the campaigns for which you want to apply ►► "Edit" ►► "Change targeting" ►► "Lists of negative keywords". 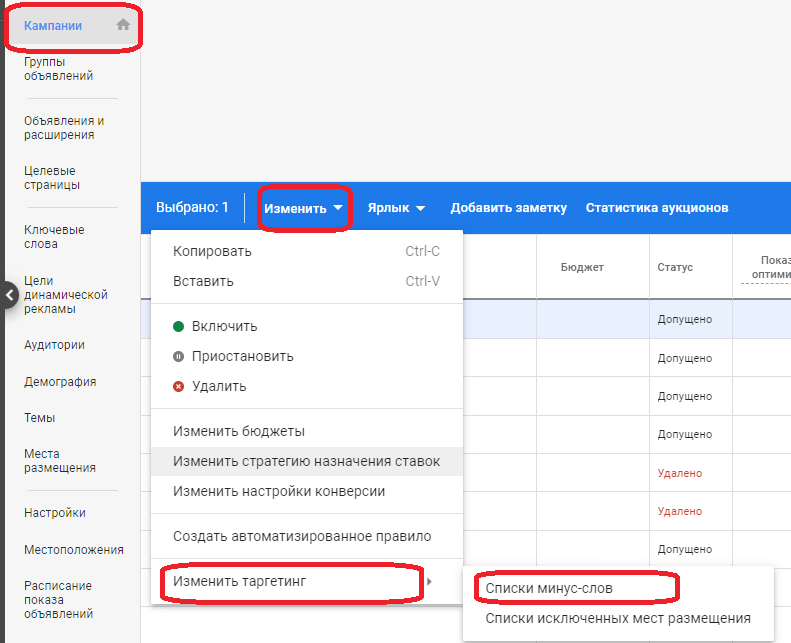 Then a window will appear where you need to check the lists of negative keywords and click "Apply".. 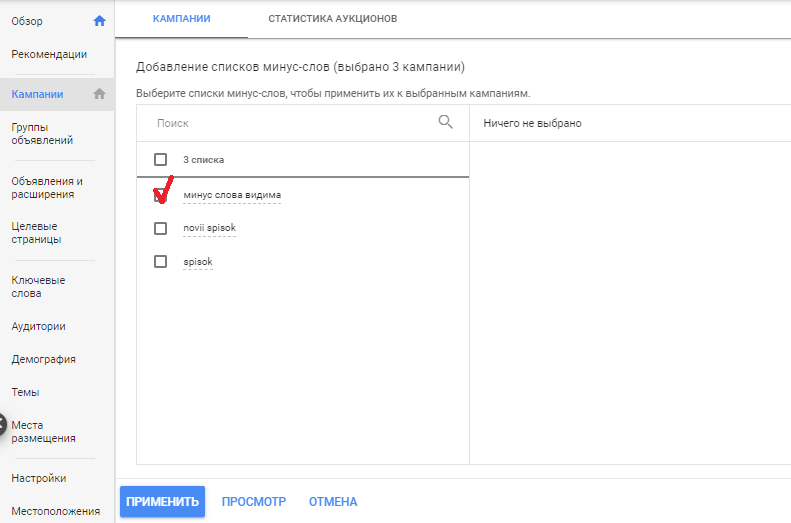 You can view the changes made by clicking on «View».

Method number 2 (through the "Shared library")

Using it, you can select current lists or create new ones. This is especially useful if you want to apply the list of negative keywords to all existing campaigns in Adwords at once.

So, to add a new list, you will need to:

Then a window will appear where you need to specify the name of the list, add negative keywords and click "Save": The procedure for adding existing listings to multiple advertising campaigns: How do I remove a list of negative keywords?

Sometimes high costs in a highly competitive niche do not allow you to constantly pay for the costs of contextual advertising, so you have to optimize it. If you plan to replace one ad campaign with another, you may need to delete the negative keyword list that was used for it. This requires to: 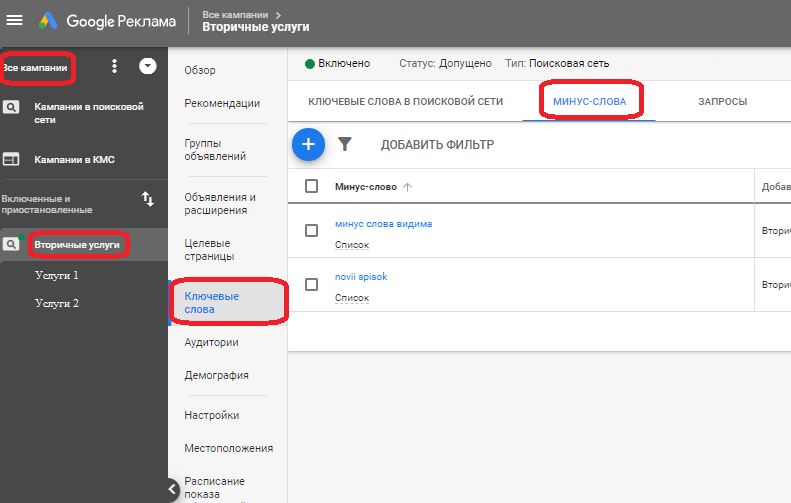 If you need to remove the list of negative keywords from all ad campaigns at once, then your procedure is as follows: 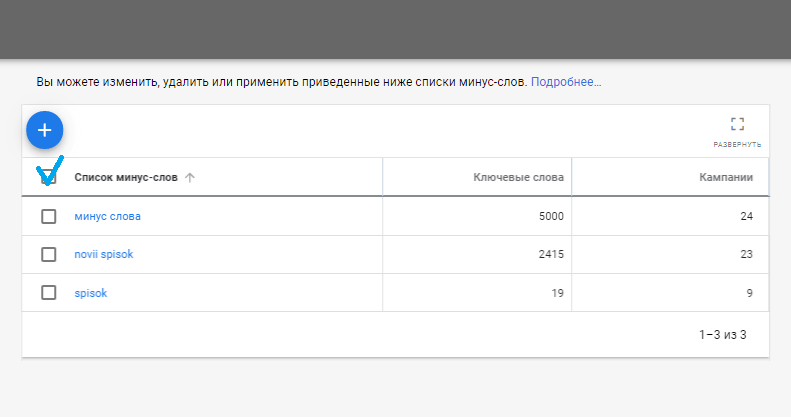 How often should you clean up negative keywords?

This is best done on a regular basis. This can be done every morning, once a week, but experts still recommend every day. Let's consider step by step the procedure for cleaning negative keywords. ►► We indicate at what level negative keywords will be added When adding at the campaign or ad group level, simply click Save.

In the case of choosing a list of negative keywords, just select the one you want:

Or check the box "Save in a new list and apply negative keywords" and write the name of the list. 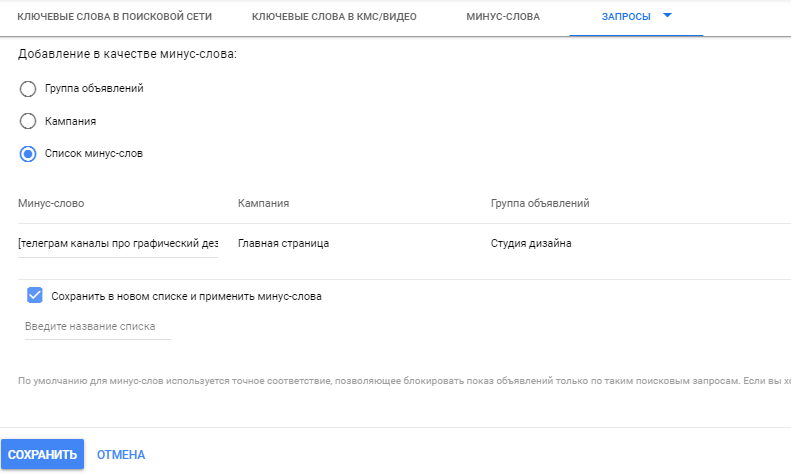 In the search network, the keyword determines the topic of your business together with the interests of the users - this is the principle by which contextual advertising is displayed to them. By accurately identifying and regularly cleaning negative keywords in your advertising campaigns, you can prevent the display of ads if the interests of Internet users and the goods / services you offer do not coincide. What does it do? You optimize contextual advertising, increasing its effectiveness, and at the same time save money, since the display of ads to non-target users is reduced to almost zero.

Author
Ana Topor
Leader of marketing department. In Studio Webmaster I work since 2015. In marketing, more than 8 years. I read about 100 books per year, I can't imagine my life without sport, I love photography. I like black and white movies. I used to do martial arts. My motto: “Never give up!”, few argue with this :)
Вам также будет интересно 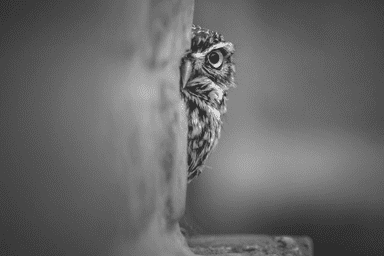 Adword ads aren't displayed What to do? How to use extensions in Google Adwords? 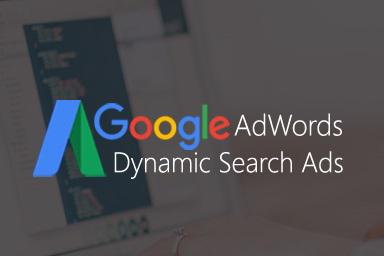 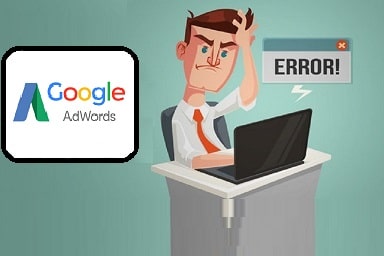 Google ads: common mistakes made by newcomers to Adwords 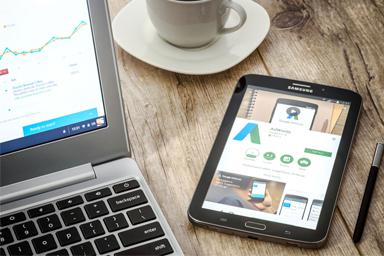 Google AdWords for business promotion: instructions for use
Comments (0)
To leave a comment, you need to come in