Content
What is Image Optimization?
What does image SEO include?
Peculiarities of image optimization of different formats
What is the best image format to upload to the site?
How to optimize images on the site for SEO?
How to register the "Alt" and "Title" attributes? (H3)
How do I reduce the weight of images without losing quality? Optimization Services
How to check the quality of image compression?
SEO

How to optimize images: a detailed manual

Reading time: 2 minutes
No time to read?
Leave a request
We will send the material to you by E-mail:
Send

For 99.9% of internet users, website loading speed is very important. And in search engines, it is one of the ranking factors. The weight of pictures and photographs significantly affects the loading time of web pages individually and the resource itself as a whole. If the user has to wait a long time, he suddenly leaves the site.

To speed up loading speed, you first need to optimize all images, be it an online store or a one-page website.

What is Image Optimization?

Image optimization (resize) is the process of compressing pictures or photographs to reduce their weight and download speed. Optimization is performed by removing some information from the image file, thereby reducing its size.

What does image SEO include?

We are all familiar with image formats such as PNG, JPEG (.jpg, .jpeg .jpeg or .jfif), SVG, TIFF, GIF. There is also WebP. Each of these is for a different type, purpose and size of picture.

The difference of GIF format is the animation support (several frames replacing each other with some frequency). GIFs are suitable when you want to:

The JPEG format supports 16 million colors and shades. Frequently the quality of the picture is noticeably lost when compressing images in this format. JPEG is good for:

PNGformat for compression is optimal because images are optimized with no loss of quality. PNG8 supports 256 colors, and PNG24 is the same as JPEG with 16 million colors. A distinguishing feature for this format is the ability to set a certain degree of transparency (alpha). PNG is suitable for:

WebP — this is a relatively new format. Its main features:

PSD — a graphic image storage format created specifically for Photoshop. Files of this type are compressed without loss of quality.

It's suitable for those who work with Photoshop. It allows you to save all layers, effects, and other features in the editor.

SVG (Scalable Vector Graphics), unlike previous formats, is not a bitmap. It is a scalable vector graphic. SVG is best used when you want to:

animating part of the image.

SVG is generally used for icons, logos, and low-color schemes.

In the table below we summarized the most important things about the optimization of images in different formats.

What is the best image format to upload to the site?

How to optimize images on the site for SEO?

When optimizing images, keep in mind that content is primarily for users. Therefore, it is important not only to choose the optimal quality-to-size ratio, but also to look at the appropriateness of using the pictures. For example, an image that does not match its description or is located near text that has nothing to do with it is considered low-quality and unoptimized.

When ranking, search engines take into account the location of the image next to the text. Therefore, it is worth adding visual elements in accordance with the subject of the content and not placing important text information on the picture itself (search robots cannot read it).

To provide search engines with up-to-date information about the content of the image, you need:

How to register the "Alt" and "Title" attributes? (H3) 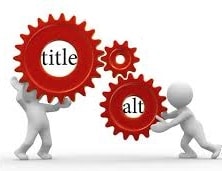 "Alt" - An alternative description that is used to indicate what is shown in the picture. The optimal variant of "viola" for an image named optimizaciya-izobrazhenij.jpg might be:

"Title" is an attribute that also helps describe the image. The text written in the "title" is displayed to the user when he hovers over the picture.

Yes, that's okay. Especially if you have a lot of the same type of pictures or photos on your site. Better when descriptions are similar or the same than none at all.

Why is it important to write the "Alt" attribute correctly?

Please note ! Keywords can and should be written in Alt , but this attribute should not be a source of spam.

alt = ”How to drink whiskey properly”;

alt = ”What to eat with whiskey, pic.1” (if there are many similar pictures).

Important! Alt-a must not exceed 125 characters, including spaces.

How do I reduce the weight of images without losing quality? Optimization Services

is Now a huge number of tools which help to optimize pictures and to convert them from one format into another. Many of them allow to perform optimization, without losing at the same time quality.

1 ) Image Compressor (imagecompressor.com) & mdash; for JPEG and PNG files, it is possible to download up to 20 images for 1 time. 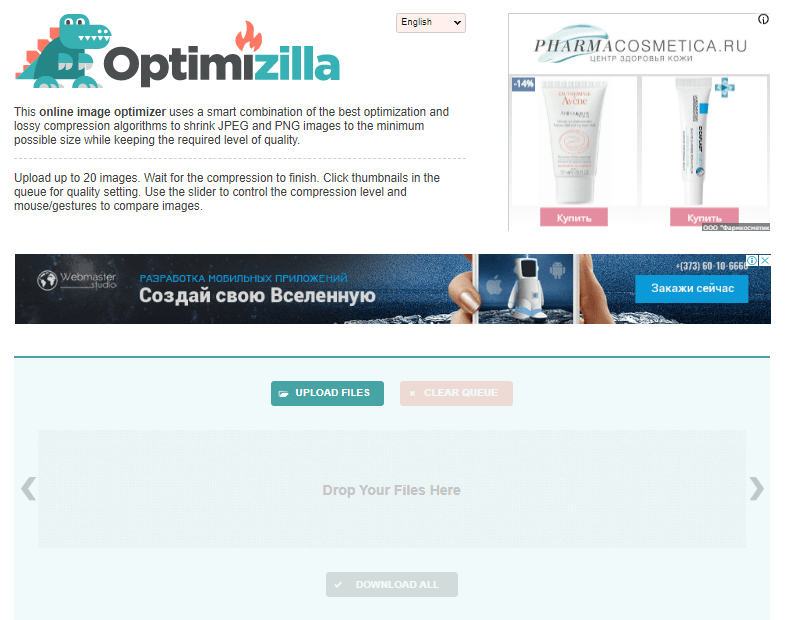 2) of Iloveimg (iloveimg.com) & mdash; JPG, PNG, GIF. 15 pictures for not authorized users for 1 time. At authorization & mdash; 30. It is possible to load a photo from Google Drive and Dropbox. 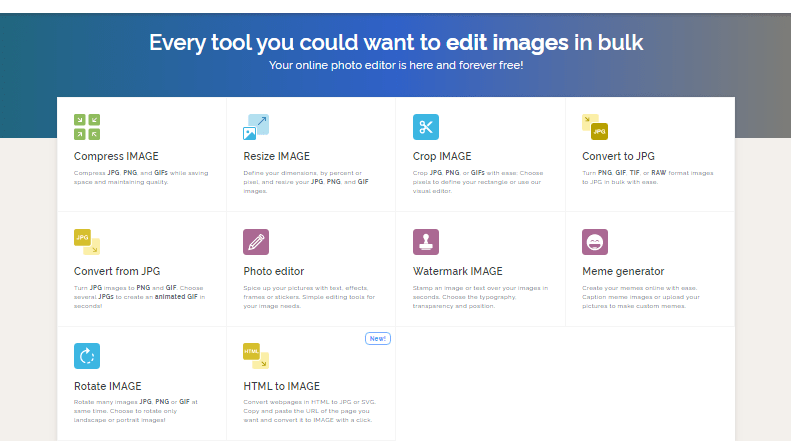 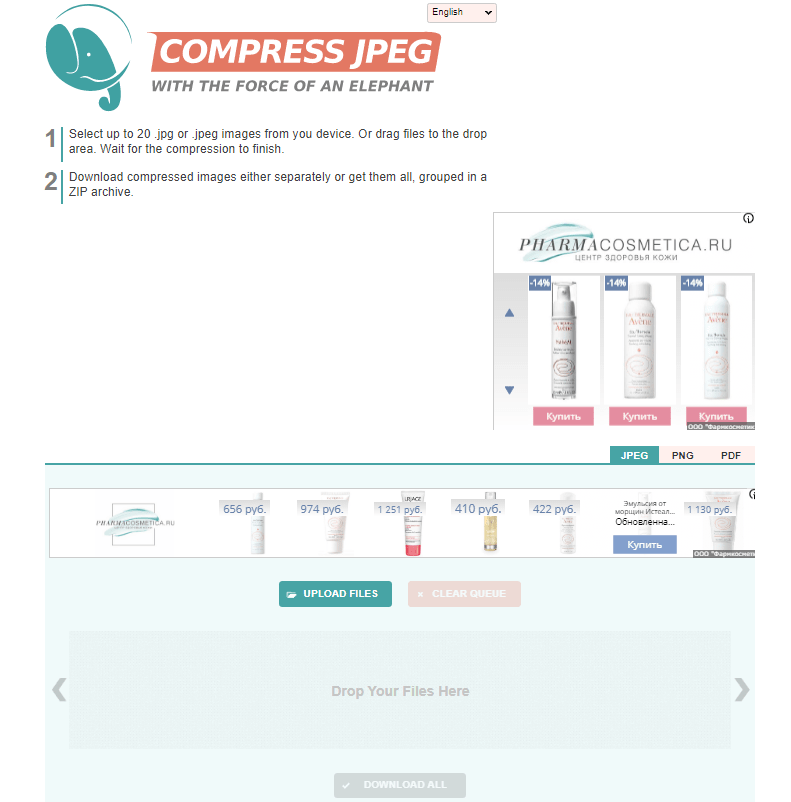 4 ) JPG Zipper ( of zip.yutex.ru ) & nbsp; & mdash; service for compression of the JPEG files. The coefficient of optimization varies: big images from 500 KB can be squeezed without loss of quality to ~ 100 KB. 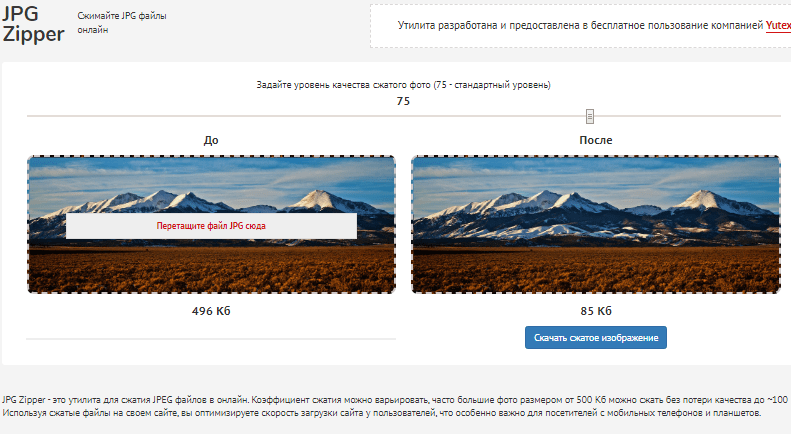 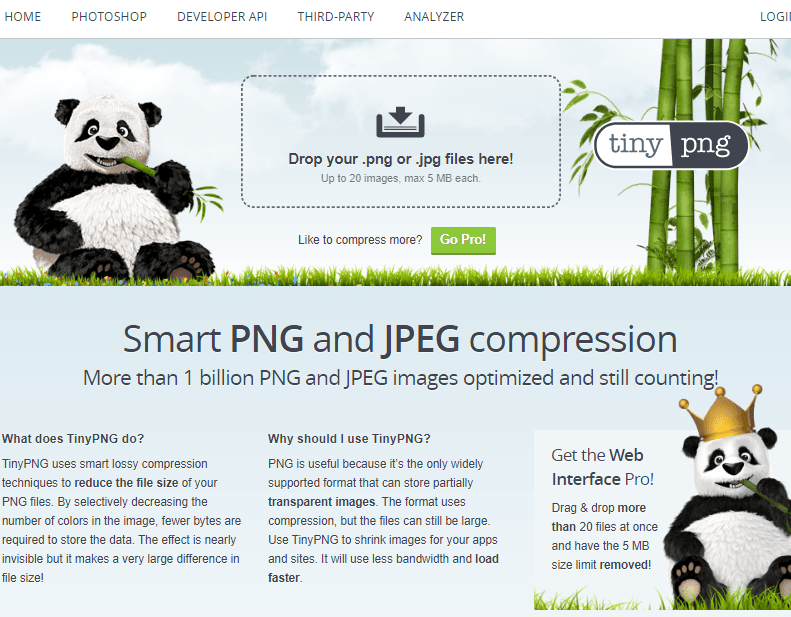 6 ) Kraken ( of kraken.io ) & mdash; it is possible to squeeze as one, and several files. Function of optimization of pictures from a web resource is available: for this purpose it is necessary to specify website URL, then it is simple to keep archive with already optimized images. 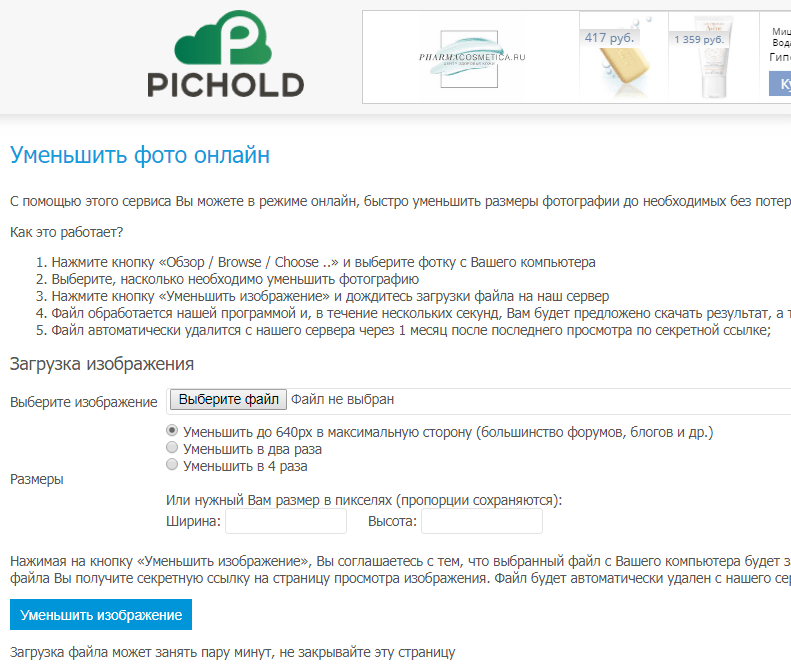 8 ) I of mageOptim ( of imageoptim.com ) & mdash; for JPEG, SVG, GIF and PNG. Allows to optimize several images at once. The decision in a look ON for Mac. 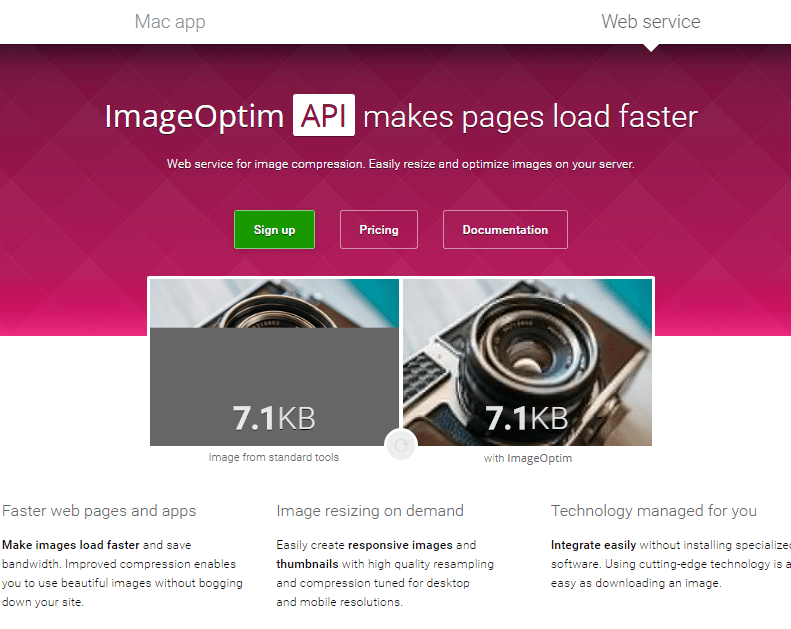 9 ) of IMG of online (imgonline.com.ua) & mdash; one more service reducing the weight of pictures. Works with such formats as BMP, GIF, JPEG, PNG, TIFF. 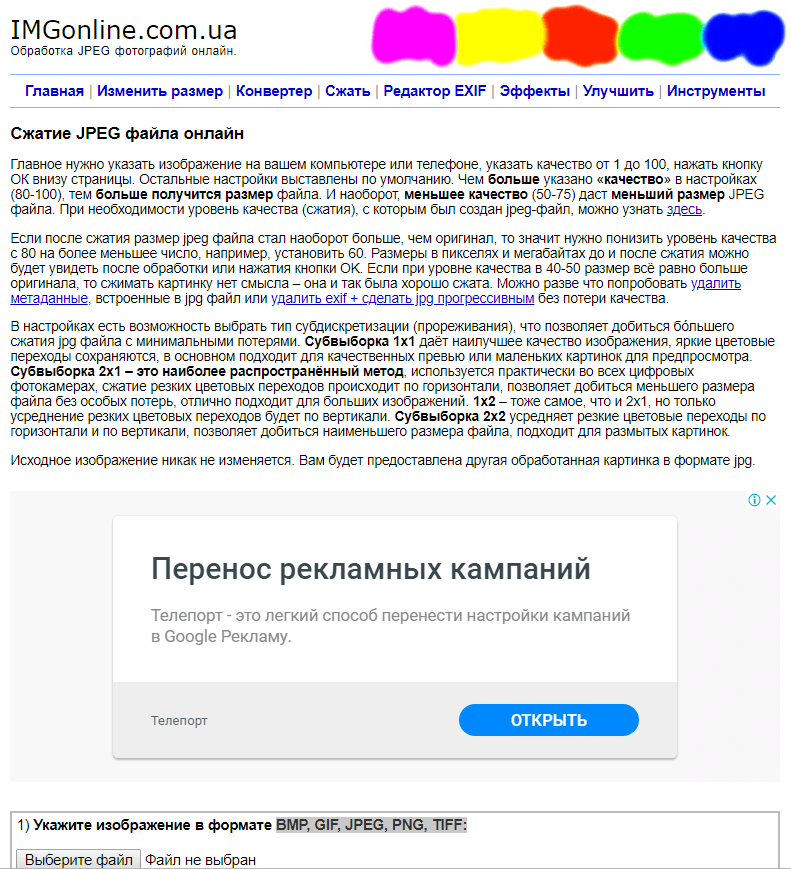 10) Compressor (compressor.io) & mdash; works with the JPEG, PNG, GIF, SVG formats. Without loss of quality it is possible to squeeze only images of JPG and PNG. But the efficiency of reduction of weight leaves much to be desired: in any other service you receive + 4-10 more % to compression. 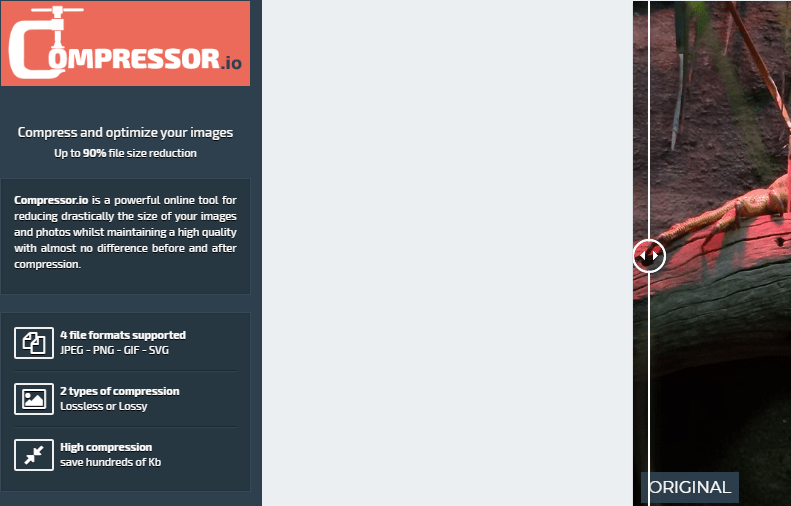 11) Webresizer ( of webresizer.com ) & mdash; the service intended for optimization of images of JPEG, PNG, GIF with a possibility of change of their sizes. Width by default & mdash; 400px. 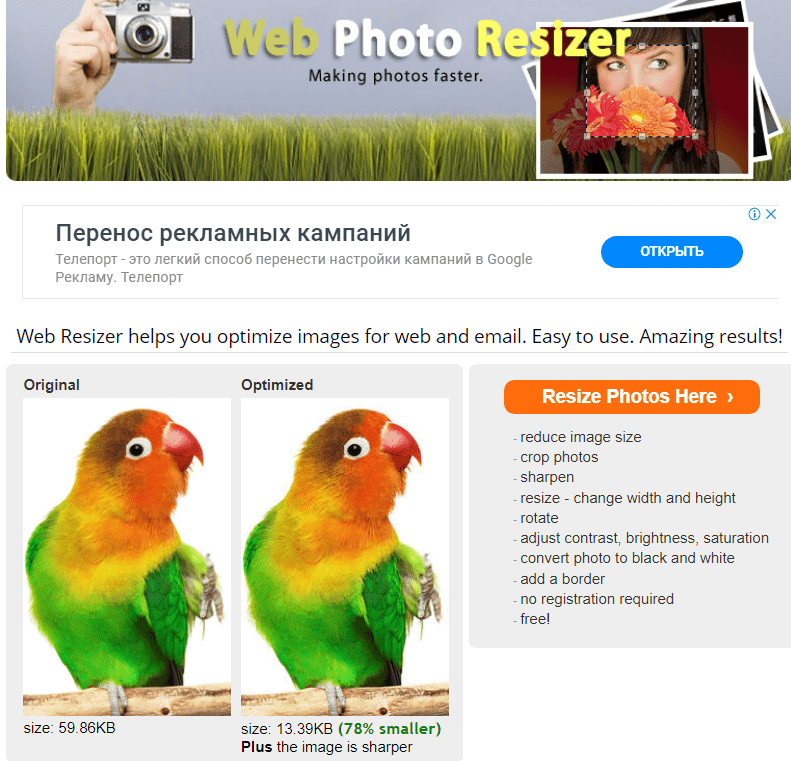 How to check the quality of image compression?

For this you can use any service to check the loading speed of the site. For example, gtmetrix.com shows you which images on the site are «heavy» and how much more they can be compressed.

By the way, it's better to do compression before uploading images to the site. This minimizes the amount of image manipulations for optimization later on. 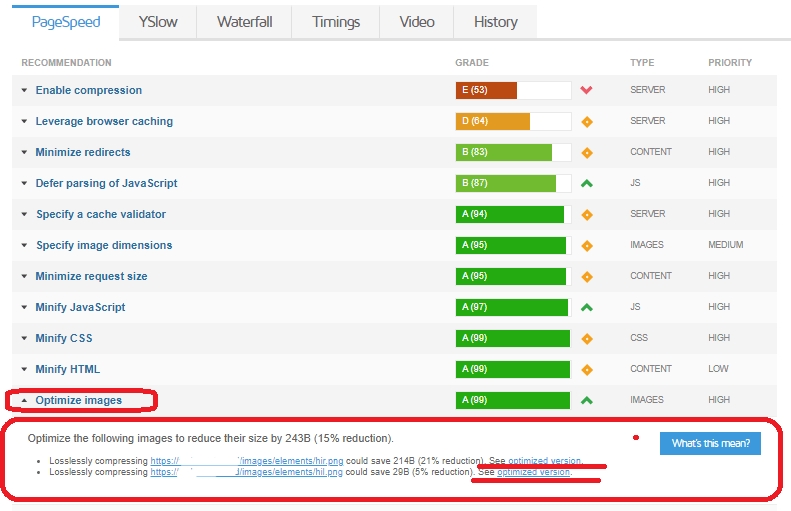 Services for optimizing images are indeed many. Among those we have used and can recommend, we should mention Optimizilla (Image Compressor), Iloveimg, Titypng (for screenshot compression package — perfect solution), JPG Zipper, Kraken.

When uploading images to your site, give adequate and valid descriptions, provide an «Alt» attribute, use keywords, but avoid spam. To get the most out of optimizing images for SEO, images should not only be good quality, but also unique, because quality, relevance, and value — these are fundamental criteria for search engines when evaluating content.

Author
Igor Kapanji
Email-correspondence and push-notifications specialist. In Studio Webmaster I work since 2017. I can't live without basket and hokey. I dream about fishing in Norway, sit in the Trolltunga (cliff that rises above the lake Ringedalsvatnet, situated above 1000 meters above sea level). Without 4 liters honorary blood donor in Moldova :)
Вам также будет интересно 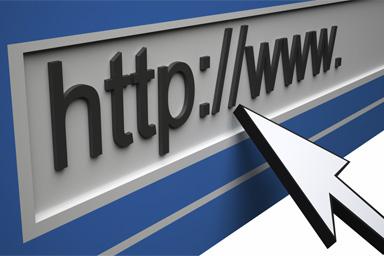 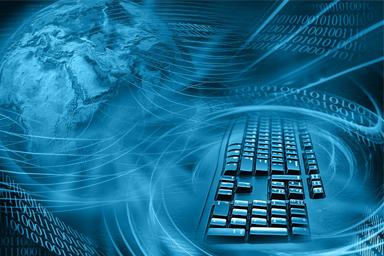 Why SEO? What does the optimization of the site offer in search systems 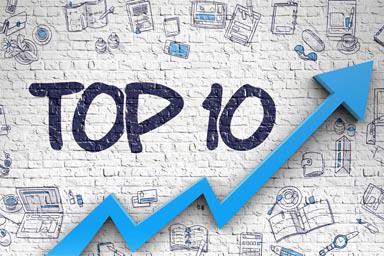 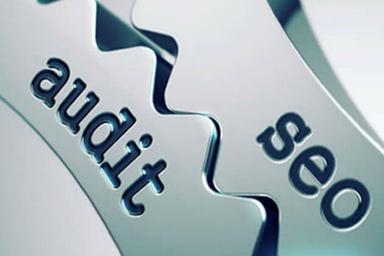 External site optimization: self-audit checklist
Comments (0)
To leave a comment, you need to come in